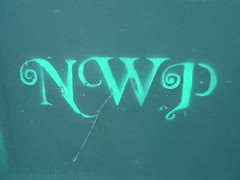 NWP fancy stencil
It’s the second time I’ve tried to trace enigmatic stencil graffiti on the internet. NWP had me foxed until I discovered that it stands for Nottingham Wood Pushers. Now that could mean absolutely anything to a group of teenage boys in the ‘burbs of Nottingham. Interestingly they turn out to be a social group of MySpacers with a feel for street art and other things on the fringes of legitimacy. The previous time I played this game was the Crude Black Millions episode described here. But both these (like the Street Piano story) show social groups organizing and communicating in a way that blends online and offline, cyberspace and meatspace - albeit for different purposes!
Posted by Guy Merchant at 8:23 AM