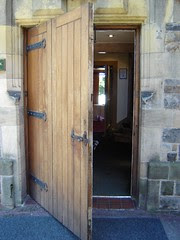 Whirlow 3
Following on this story on Saturday I was interested in the Indian government’s attempt to block blogs following the Mumbai bombing. Success, according to this article was limited: “Because there is no central point of control, such blocks are haphazard. In such a situation, it can be difficult to tell exactly what it is that the government has ordered to be shut down.” …which I suppose is both good and bad, depending on who might want to shut who up for what particular reason.
Posted by Guy Merchant at 12:48 PM