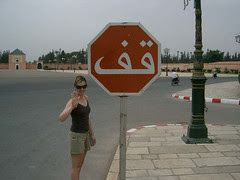 Moroccana104
Judith Butler is demanding reading, packed with the sort of philosophical density that challenges existing ideas. But I’m happy with the straightforward nature of stuff like: “…to tell a story of oneself is already to act, since telling is a kind of action, performed with some addressee, generalised or specific, as an implied feature. It is an action in the direction of an other as well as an action that requires an other, in which the other is presupposed.” (2005:81). That seems to dovetail in with what I was trying to get at here by grafting on the concept of social networks as contexts for identity performance. I also put a bit more on the identity theme here. Then, almost as light relief , I’ve found this fourfold categorization of selfhood quite useful, too!
Posted by Guy Merchant at 8:13 AM