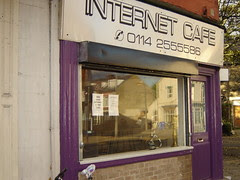 old post office with hookah
Looking back , this used to be the post office on the corner. It's a sign of the times that its changed to an internet cafe, and next day delivery won't be a problem any longer. Looking back on this (which was a long and serious post), I found the discussion quite interesting. The network metaphor is worthy of analysis, but I’m not so sure I’m so concerned about the ‘dark matter’ between nodes. There’s some interesting comment on the emptying of space (Giddens makes a similar observation) and I do think it’s worth thinking about the institutions, technologies and spaces that support and facilitate networking, but I don’t see Networked Individualism as anti-social, just more fluid than earlier social systems. If, however, Networked Individualism is our future then there are implications for civic participation and political engagement that will result from a new sense of belonging which may not necessarily be anchored to the nation or state.
Posted by Guy Merchant at 9:22 AM