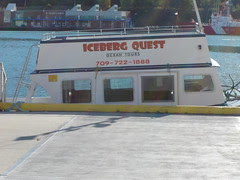 Where?
I’m just back from this in Canada, which was a really interesting event. It was good to be working with blogger friends as well as unblogger friends. It was probably a good idea not to go iceberg-hunting. Talking about Flickr stuff helped me develop a new angle on seeing and tagging which I need to write out in more detail soon. And on the topic I’ve just found out that Flickr introduced geotagging in August this year. How cool is that? It’s so simple, you just drag and drop pictures onto a map, satellite or hybrid. I started doing this with my Newfoundland set and then realized that that was pretty pointless – but there are lots of other contexts in which this could be really useful (padlocks for example!).
Posted by Guy Merchant at 1:20 PM