The violence of writing 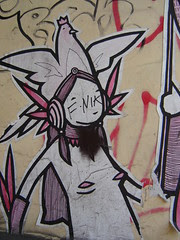 Old one
Michel deCerteau describes the role of writing in the Christian West from the Puritans onwards. Writing becomes a kind of rewriting, a power of reform and repression. 'Writing acquires the right to reclaim, subdue or eradicate history. It becomes a power in the hands of a "bourgeoisie" that substitutes the instrumentality of the letter for the privilege of birth, a privilege linked to the hypothesis that the world as it is, is right. Writing becomes science and politics, with the assurance, soon transformed into an axiom of Enlightenment or revolution, that theory must transform nature by inscribing itself on it. It becomes violence, cutting its way through the irrationality of superstitious peoples or regions still under the spell of sorcery.' (deCerteau, 1988:144) I wonder what or who are the modern victims of the violence of writing?
Posted by Guy Merchant at 1:56 PM