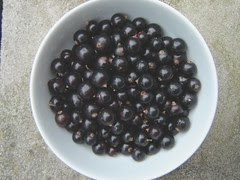 berries#4
This is a great story about a 4 year-old girl who called the emergency services 287 times on a mobile phone. Apparently they tracked her down by discovering she was hungry and suggesting that if she gave her address they could home-deliver a MacDonald’s! The report doesn’t say whether or not she actually got the burger, but her mother has now repossessed the phone. Back at the ranch I’ve been reading Steinkuehler on researching literacy. She (and her co-authors) take Markham’s notions of internet as tool; internet as place; and internet as way of being and substitute the word ‘literacy’ for ‘internet’ – a sort of academic mash-up, I suppose. The article works on some levels. Referring to MMOGs (but it might as well be new literacies, in general) they suggest “they offer new contexts and resources for forms of semiotic work or play that challenge antiquated models where production and consumption are held as separate ends of the meaning-making process.” Nothing new there, but it’s well put and forms a useful way into considering methodologies.
Posted by Guy Merchant at 1:41 PM