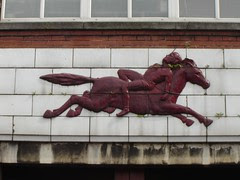 Mazeppa
This photograph captures a Victorian bas-relief above the lintel of Hancock and Sons on Little London Road, Sheffield. They were manufacturers of straightedge razors up until 1909, and the building is located just beside the River Sheaf. The logo of the Mazeppa Works draws on the then popular romantic image of Mazeppa – who is described as “hetman of the Cossacks at the beginning of the 18th century”. The legend of Mazeppa, tied to the wild horse became a symbol of the artist in European art and literature. Voltaire, Hugo and Byron were attracted to the story, as well as many French artists. It is alternatively described as a “blood-thirsty tale of crazy love, abduction, political persecution, execution, and vengeful murder..”
Posted by Guy Merchant at 1:39 PM

Commenting on your own blog is a bit pathetic, I know - but I wanted to keep a record of the Mazeppa trail. So given the folktale, why the connection with straightedge razors? Well,it turms out that Mazeppa was a big hit with Peter the Great who had a 'crusade against beards and cloaks'! You have to know your Russian history to get the full sense out of the bas-relief on Little London Road. (Now that's what I call nerdiness!)