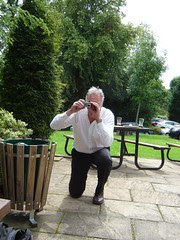 go for it Jeff
It’s reassuring to discover that some people are paying serious attention to avatar interactions. At the moment the general picture seems to be that avatar interactions reflect real-world interactions – as in real life so in virtual life. Probably the first thing we want to know is whether or not the avatar we’ve met is operated by a human (ie: not a bot). Once we’ve crossed that bridge and we know they’re ‘real’ we want to know their gender. Research suggests that spivaks and androgynous avatars are “perceived as less trustworthy than ones that are clearly either male or female”. After that, according to this, we’re influenced by their height (stature) and probably their status. Then we build up trust through everyday sounding things like eye contact. That’s virtually the same as we’re used to in the real world, surprise surprise!
Posted by Guy Merchant at 12:22 PM