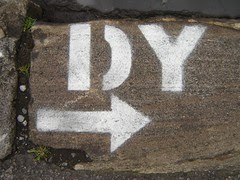 Roadmark#2
I suppose it’s inevitable that class affiliation is evident in social networking – after all we’re not all wired into some kind of utopia. Nevertheless it’s not received much attention and of course it is hard to research. Here’s Henry Jenkins commenting on something said by Danah Boyd. Now earlier this week I made some observations about the rise of Facebook in the UK and commented on it’s elevation to the status of “cool”. I’m not suggesting that everything American can automatically be read on to the UK scene – in fact, to the contrary, we have very different stories to tell about the technologies we take to. Yet it is interesting how the MySpace v Facebook thing is differently nuanced in the two countries. Of course you could say that what’s cool is related to class, but my hunch is that it’s a lot more subtle than that. Gender, age, race and occupation are probably just as influential in our social networking choices…why wouldn’t they be?
Posted by Guy Merchant at 10:49 AM