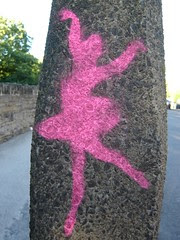 Pink dancer
For a number of years the idea of the print environment has been influential in the discourse of early childhood literacy. Drawing young children’s attention to the presence of print in their world – and its meanings and functions – has been an important feature of the pedagogy of emergent literacy. As often happens this sort of idea is contagious, and those professionals who work in the field of early literacy can become over-sensitized to the print environment. At least that is my own experience, and my interest in graffiti, urban mark-making and stencil-work springs from this. I’m particularly interested in the unregulated meanings made on surfaces like walls, shutters, bridges and street furniture. It strikes me that they are examples of a fundamental desire to express - to express opposition, anger, ambition, desire, social comment, love and hate, and so much more. They are essentially individual expressions, a kind of identity work, and a way of temporarily marking one’s presence in the environment. Stencil-work is a specific ‘genre’, significant because it is predominantly visual, but also because it involves careful preparation, a design process, practising and a choice of materials. But the concept of the print environment becomes less useful when we move into the visual mode – and certainly in the example above, meaning becomes open or fluid. Why a pink ballerina dancing on a lamppost in Sharrow? What could that signify?
Posted by Guy Merchant at 1:25 PM