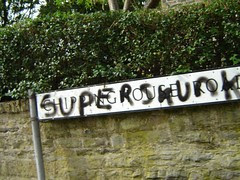 S7 street renamed
Michael Gorman is the latest recruit to the conservative Web 2.0-backlash movement. He launches off on a many-stranded rant over here. I was interested in his take on literacies, however, which made pleased that I’ve articulated my position as best I can because I wouldn’t want it confused with his – I quote from Gorman: ‘True literacy—the ability to interact with complex texts and the ability to express complex ideas in clear prose—is being equated with ill-defined concepts such as “visual literacy,” “computer literacy,” and “21st-century literacies” as if they could make up for illiteracy and a-literacy. Some have proposed that playing video games is an activity on the same plane as reading texts and equally beneficial to mental growth.’ I believe that literacies warrant careful definition; but Gorman’s gives it all away in the final clause, which privileges print literacy as ‘true literacy’, and in the end as a superior cultural product.
Posted by Guy Merchant at 11:18 AM

Great paper, Guy, is it coming out anywhere (for citation purposes)?

Thanks Jackie! It's been accepted for Literacy - either the end of this year or early 2008.