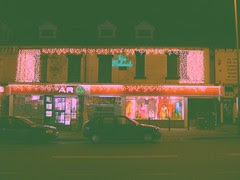 Horobin's was the corner-shop where I grew up. Mr Horobin was a neat man with brylcreamed hair and he always wore a white grocer's coat. He had a bright red bacon-slicer with a shiny black handle and a spinning circular blade which made a zinging noise as it cut through the meat.

There was a scare about corner-shops then. Would they survive the competition from the new generation of supermarkets? Just to protect themselves, we were told, many corner-sops became Spa shops - which meant they modernised. Mr. Horobin was one of them. He stopped slicing his own bacon. Instead it came in vacuum-sealed packets.

Nevertheless I feel a certain nostalgia about Spa shops. This one's my local. I love it, not just because it's open 24 hours, but because half of it sells saris and shalwar kameez and they always play the best Bollywood or Bhangra beats (depending on which generation is behind the counter). They're just as friendly as Mr. Horobin and not nearly so greasy.

As you can see, they've re-connected the Eid Mubarak lights in celebration of Eid-ul-Adha. I tried to catch this evening's full moon above the shop, but that defeated me. I went in and bought some crisps instead.

I love this piece of writing And I like the way it does not just harpn about the past; instead it recognises the historical inevitability of the new.
(And incidentally, as Dana Cammack says, we really should stop saying NEW Literacies when we mean some quite old techie stuff. Then we can get nostalgic about BBC computers and 'Archimedes' etc.)

Thank you for your kind and linky comments.