Off the shelf/off the wall 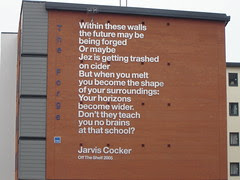 This is a piece by Jarvis Cocker for the Sheffield "Off the Shelf" poetry festival. And it’s now found its way onto the wall of the corporately owned Forge site on London Road (slick city-living for students and young people). So buying or renting a property here comes with its own brand of urban writing: official graffiti (what about that Tony?)

Jarvis, one time front man of Pulp was born in Sheffield and is perhaps best remembered for his stage invasion when Michael Jackson played at the Brit Awards in 1996. Never one to mince words, Jarvis said at the time:

“My actions were are form of protest at the way Michael Jackson sees himself as some kind of Christ-like figure with the power of healing. The music industry allows him to indulge his fantasies because of his wealth and power.”

And, here on the walls of the Forge he speaks out again. Graffiti or art? Or is it simply words as decoration, an extension of corporate graffiti as a kind of advertising. I think I coined the term urban literacy in an earlier post; words on the street. But the crucial distinction between graffiti and other forms of urban literacy is often based on its legitimacy – or more accurately who did it, because we must control written expression, mustn’t we?

How can you tell the diff between coining a term and just saying it? I wanna coin a term.I just talk BS.

But she didn't understand,
She just smiled and held my hand.
Rent a flat above a shop,
Cut your hair and get a job.
Smoke some fags and play some pool,
Pretend you never went to school."