Shame about the missed meme 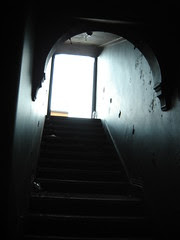 Small mistakes: oversights. On my photostream I put this against the picture above:

‘ ..daring. I kicked the door open to the old cinema (recently used by a club called Bed) and stepped inside. All that's left is the facade and the staircase to nothing. Looking carefully you can just see the new brick edge of the Forge (the one that has the Jarvis Cocker poem on)’.

I’d also missed the fact that that ‘innocent’ little Flash game was a major meme. Yesterday, I wrote:

Sometime later I remembered someone had described this to me a while ago – I’d heard it. Then I found the Bloody Penguin, the archives and a description of the whole meme. Well, duh! Anyway that prompted me to reflect on meming and tagging. Meming’s about a trajectory of mutation; tagging’s about a trajectory of accumulation. In a meme, an idea/object is transformed in successive versions, so it’s quite linear. Tags can cause you to see the original idea/object in a new light: so it’s more reflexive, more associative. How’s that, am I redeemed?

But the point about the web is that everyone joins in at a different time so part of a meme's mutation is going to be influenced by those with partial knowledge, no knowledge or loads of it.
Just like other parts of language.

So waht I mean is, that you made a bona fide response initially; not a 'wrong' one.


sorry I sound bossy but am not meaning to be. This is my earnest voice!!

Of course, but I think I was abstracting from that the fact that a meme does in fact have a history.

I think this post is realy interesting actually. It has me puzzling away about those different types of journey those two little cultural gizmos make. I like the way you talk about accumulations of meaning too; it is a clever way of expressing what hapens. It also reminds me of James Joyce and the way words do that in his writing. i.e acumulate nuances as they gather social history.

So many typos that I make .. sorry

That is sick. lol, I've seen the smack the penguin one but this takes it to a whole new level. Wild. lgp

Wild, yes, but somewhat gruesome. You should look at the so-called 'Russian' version now.

Ahh very interesting distinction that's really got my thinking, Guy. I think you're absolutely spot on the with "accumulation" descriptor for tags, although I think trajectory is a bit too linear a concept for the distinction you're making. I'm gonna throw a spanner in the works a bit too and point out that not all memes mutate... I'm thinking of Joanh Perretti's Nike Sweatshop shoees meme which was an email that was passed around intact, for example. I can see how "networks" and memes isn't enough, either, because it doesn't include the historiciity of memes, which is often (although, I'd also argue not always) an important part of the meme itself (well it's an important part for researchers in the main, I think. Most other folk don't really care about the history of something like Gary Brolson's Numa-Numa Dance or the Star Wars kid meme). Okay, off to get what I call my yeti, rather than my gorilla, to smash a few more penguins which is kinda sad, but I must say that my top score of 288.8 metres (or feet--either way, it's a long way) is worth commenting on [smile]. Interestingly, there's a reference to yetis, pengins and baseball bats in the online game I play Kingdom of Loathing"