The power of many 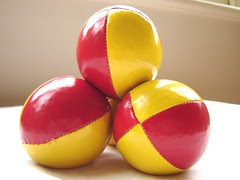 Many, so many, different things to do.... I look back over the week (particularly Wednesday) and realize that suddenly it’s Friday evening and I’ve stopped juggling: hence the picture, and the reason for so many things that I forgot to blog this week.

Many distributed machines can cause havoc. Alex Tew’s MillionDollarHomepage.com was zapped by hacker superhighwaymen after he refused to share his profits with them. Apparently hackers illegally use the combined power of other people’s computers to swamp, slow down and eventually freeze the site. This is called a Distributed Denial of Service (DDoS) attack. Read all about it!

Many, as in far too many, people can put heavy demands on massively multi-player online role-playing games, and this gets costly. Hence the fate of Asheron's Call, released in November of 2002, which was shut down by the developers despite much protest on December 30 last year.

Many of us are getting hooked on this little flash game. It’s simple. You’re a gorilla with a baseball bat. A penguin jumps off a cliff and you just see how far you can whack it with a baseball bat. That’s what I call therapy! Best score 318. Try it, it’s here and it’s irresistible!

Many people have been telling me about the whale in London. It’s on the BBC website, there’s even a video clip here, so it must be true. That’s almost as many people as commented on Monday’s post about internet scare stories!

And not so many people seem to have heard of The Books - but they have a really innovative sound (soon to be appearing under my interests when I can locate the CD), and on tour here.

[many words; many links]

Smack the Penguin. Haha I made 323.5! My students were playing this game 18 months ago! Have you seen the other versions? There are some great mods. Check these out.

Yes, thanks, I've seen them now. I got 679 (first hit):he said, competitively: but I was on steroids!